Back to Public Safety, Texas Department of 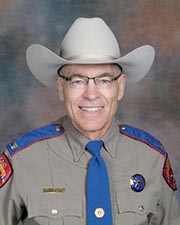 Steven C. McCraw became the Director and Colonel of the Texas Department of Public Safety in August 2009. He began his law enforcement career with DPS in 1977 as a Trooper in the Texas Highway Patrol and later as a DPS Narcotics Agent until 1983 when he became a Special Agent with the FBI. He served in Dallas, Pittsburgh, Los Angeles, Tucson, San Antonio and Washington, DC.

His promotions included Supervisory Special Agent, Unit Chief of the Colombian/Mexican Organized Crime Unit, Assistant Special Agent in Charge in Tucson, Inspector-In-Charge of the South East Bomb Task Force, Inspector – Deputy Assistant Director, Special Agent in Charge of the San Antonio office, Assistant Director of the Office of Intelligence for which he was tasked to establish after the attacks on 9/11. He was also responsible for establishing the Foreign Terrorism Tracking Task Force under Office of the Attorney General.

In 2004, McCraw retired from the FBI to become the Texas Homeland Security Director in the Office of the Governor where he served until his appointment as DPS Director.

A native of El Paso, McCraw has a Bachelor of Science and Master of Arts degrees from West Texas State University.