Back to United States House of Representatives 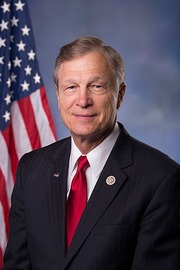 C-2015-present.
Brian Babin is a life-long resident of East Texas. He was born in Port Arthur, Texas and grew up in Beaumont. He graduated with a bachelor of science from Lamar University and completed dental school at the University of Texas Dental Branch in Houston, Texas.

Dr. Babin served as an airborne artilleryman in the U.S. Army Reserve and in the Texas Army National Guard and held various jobs to put himself through school including: merchant seaman, janitor, musician, and U.S. Post Office letter carrier. Following his graduation from dental school, he served in the United States Air Force and was stationed overseas.

In 1979, Dr. Babin returned to East Texas and settled in Woodville where he opened a dental office. Over the past three-plus decades in Woodville, in addition to maintaining his successful dental practice, he has served as Woodville’s Mayor, City Councilman, and ISD School Board Member, in addition to various other civic roles including Director of the Tyler County Chamber of Commerce and Lions Club President.

Dr. Babin has been a long-time leader in East Texas conservative politics and has been instrumental in turning what had previously been a heavily Democrat region Republican by helping build a conservative voting base and encouraging and supporting good candidates to run as Republicans. He was the Republican candidate for U.S. Congress in East Texas (former District 2) in 1996 and 1998. Dr. Babin has also served as a Republican County Chair, State Chair for Texas Dentists for George W. Bush for Governor, State Steering Committee for George H.W. Bush for President, Regional Chair for Bill Clements for Governor, Texas Dentists for Clements, State Chair of the Texas Inaugural Committee, Reagan/Bush Region II Chairman, and Reagan/Bush County Chair.