Back to Texas Military Preparedness Commission 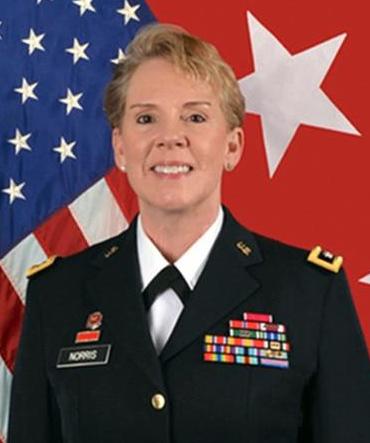 Major General Tracy Norris of Austin previously served as the Deputy Adjutant General for Army, Assistant Deputy Adjutant General for Army, and as Director of Construction and Facilities Management for the Texas Military Department. She also served as commander of the 176th Engineer Brigade and as Chief of Staff of the 36th Infantry Division; responsible for oversight of command and control throughout nine southern provinces of Iraq in 2010.

Additionally, General Norris has had the privilege of serving the Army National Guard (ARNG) in Georgia, Florida, Massachusetts and at NGB Washington D.C. She served the NGB as a program manager and executive officer, overseeing the Environmental Division; National Guard Range & Training Lands Division; and as Chief of the Training Facilities Team under the Training Support Branch of the ARNG.

General Norris earned a commission after completing the Reserve Officer Training Corps program at Florida State University, graduating with a Bachelor of Science degree in Anthropology and a Master of Science in Urban and Regional Planning. Additionally, General Norris received a Master in Strategic Studies from the United States Army War College and a Master of Business Administration from the McCombs School of Business at The University of Texas at Austin.